The weather improves so that today we betake ourselves to Portree, in our memory a small, romantic town at the banks of Loch Portree.

We are passing water falls and go down the congested roads of Skye. Street works and traffics jams everywhere. 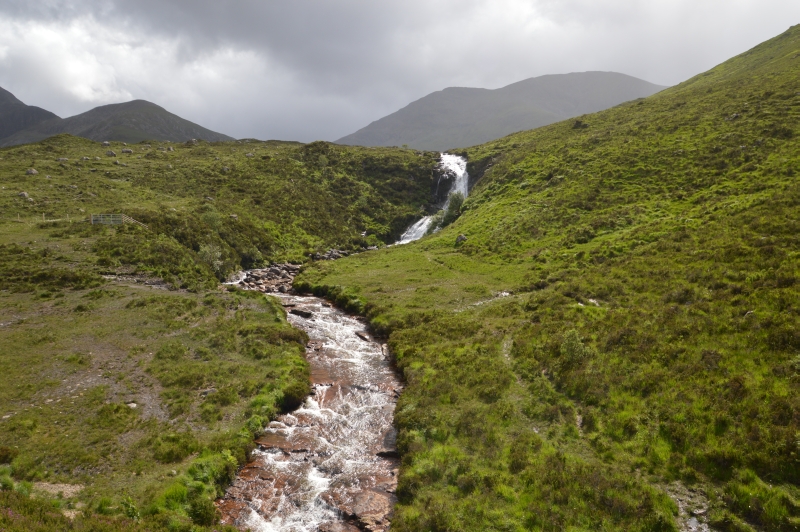 Then the route clears and we reach Portree. 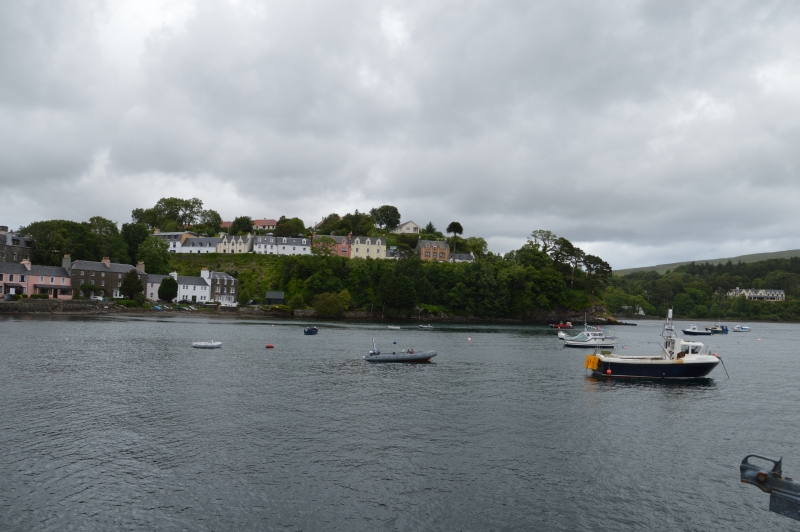 Time has stopped here between black cliffs and green mounds. 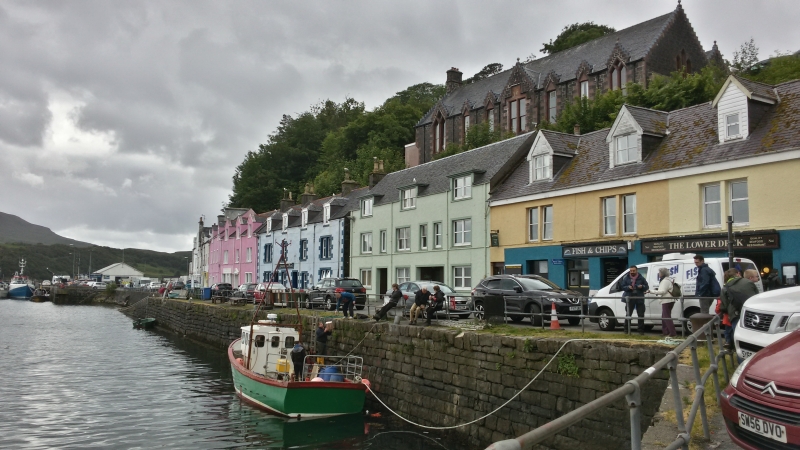 It is said that in Portree the Irish monk St. Columba has preached in the early Middle Ages, therefore in former times the bay was named Eilean Choluimcille. 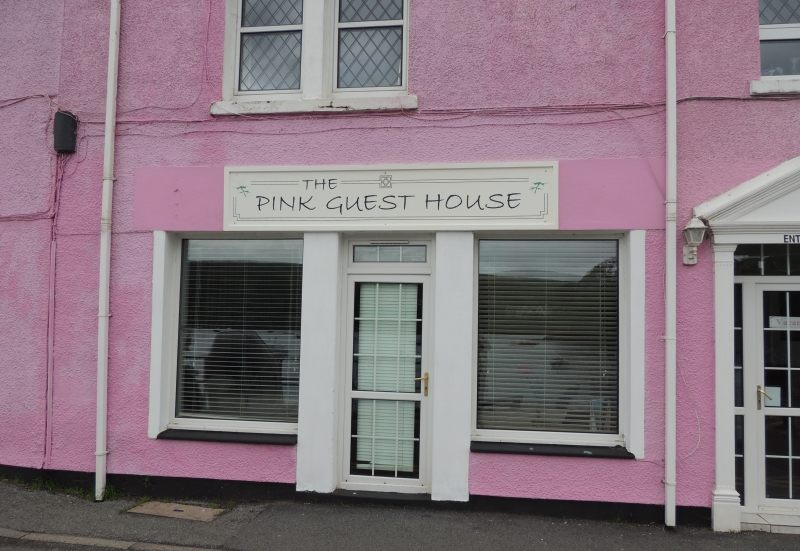 For a long time Portree consisted only of a few houses and a small pub. Only with Sir James, the 16th clan chief of the MacDonalds, who in 1766 at the early age of 25 died in Rome under tragical circumstances, the place gained some importance. 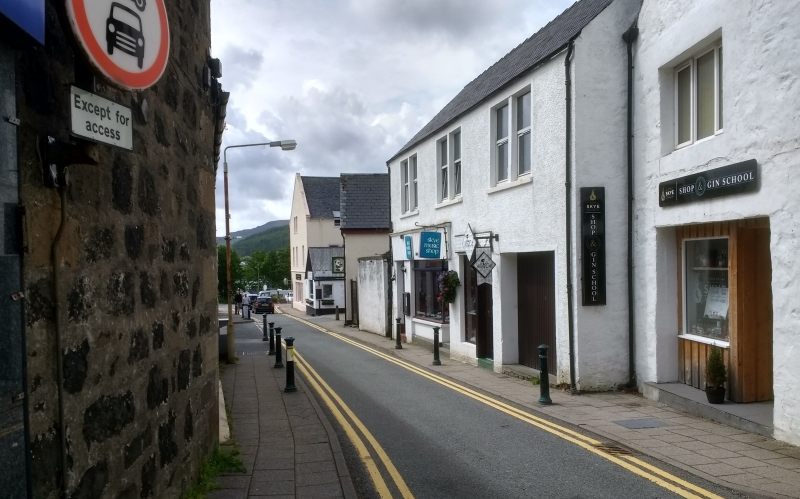 Portree is the tourist centre of the Isle of Skye and in summer always overcrowded. Especially during the Highland Games in August, the biggest regional event, accomodations all around are booked out. In 2017 this even lead to official warnings that travellers should book their rooms long in advance. Tourists without lodgings had turned to the police for help.

We go to see several shops and set out to our actual destination, the Old Man of Storr. 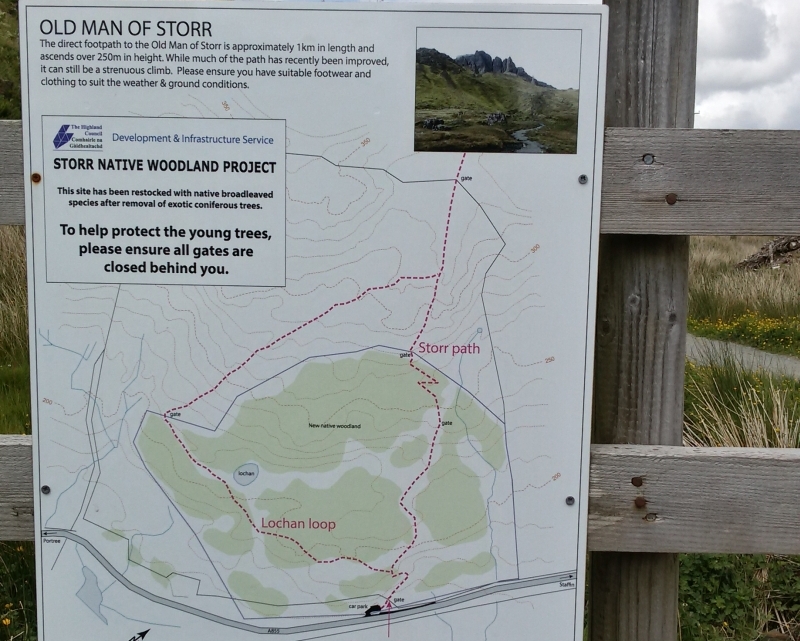 Our jam warning device sounds an alarm: a giant traffic jam ahead of us. When coming closer however, it turns out to be a giant number of cars parking left and right of the road on the peninsular of Trotternish. 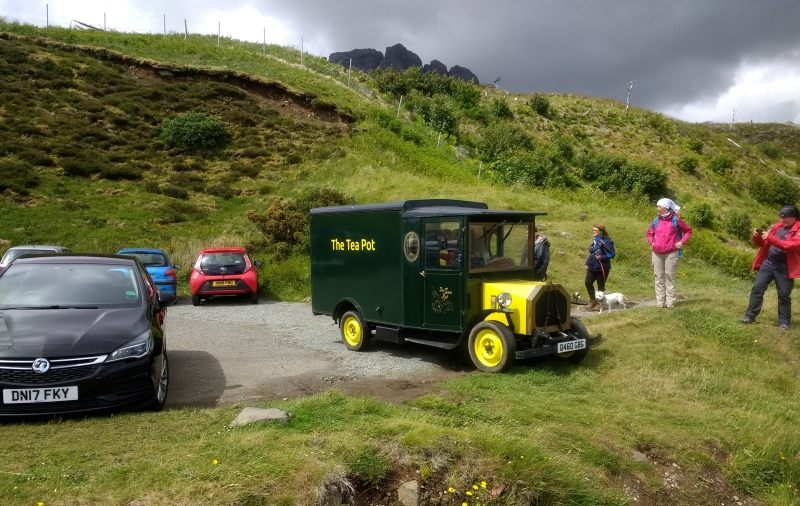 There are snack stalls and many a crazy vessel. Several hundred wanderlust-people are already here to pay a visit to the Old Man. That much to custom tours. 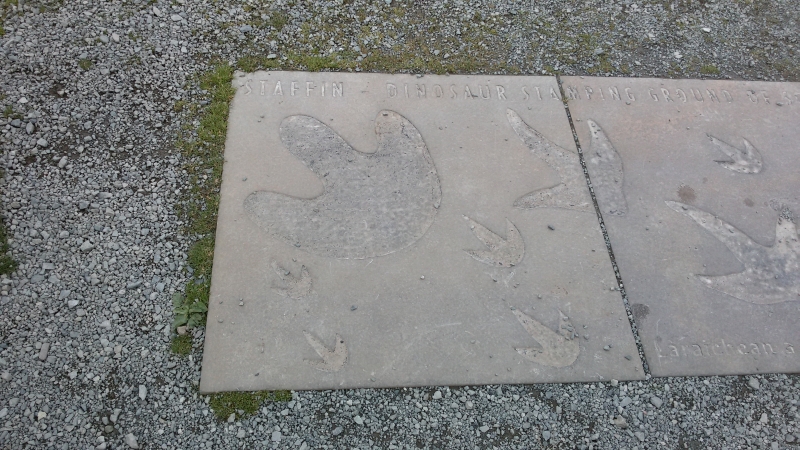 We certainly will not meet dinos on our ascent... The peninsular of Trotternish like the greatest part of Skye consists of tertiary basaltic rock, resting on the older Jurassic sediments. 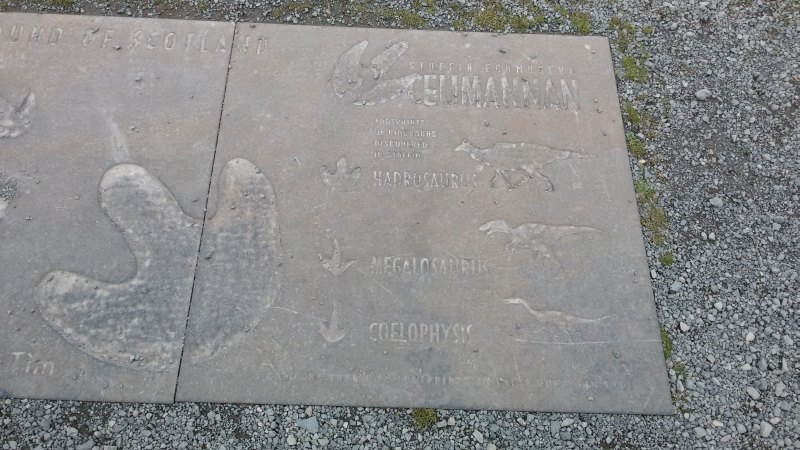 After at last finding a parking spot, we walk with the crowd. Several kilometres however are ahead of us and of of course uphill all the time so that the adventurers by and by split up. 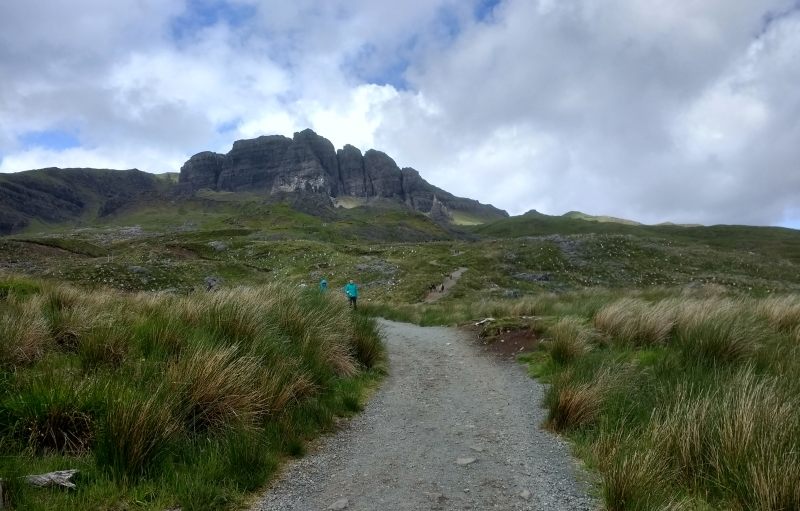 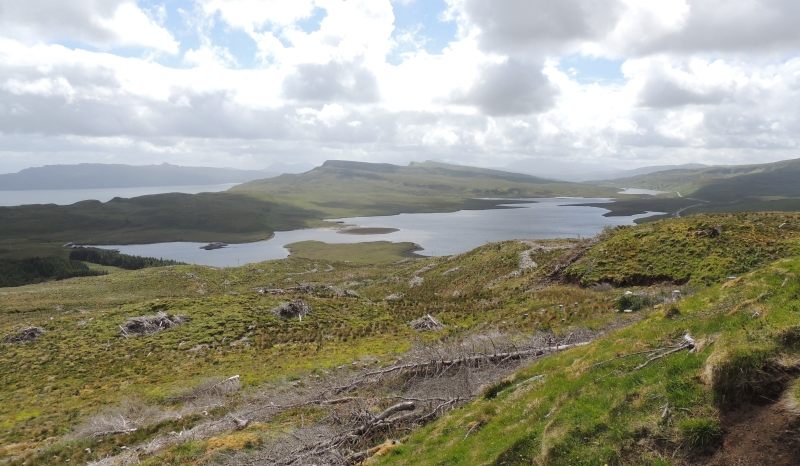 All the time the view gets more interesting, down there we can see Loch Leathan. 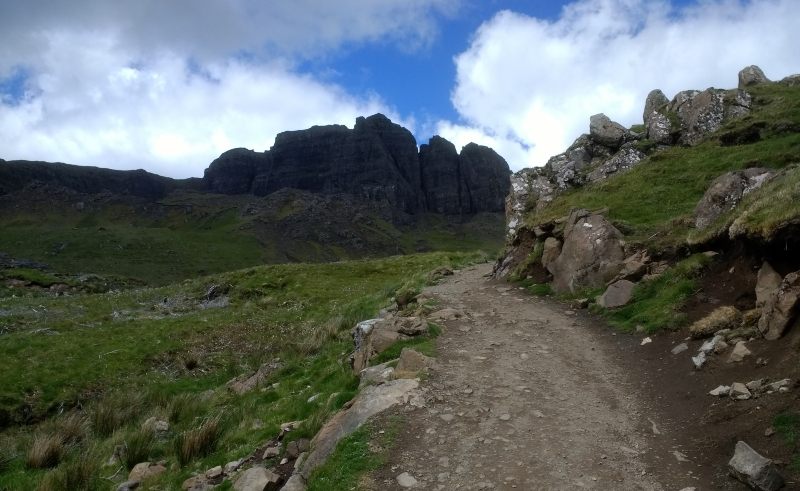 The path is rocky and steep, some sandal-wearers haven given up early. By the way, the word Storr originates in Old Nordic and means Big or Peak. 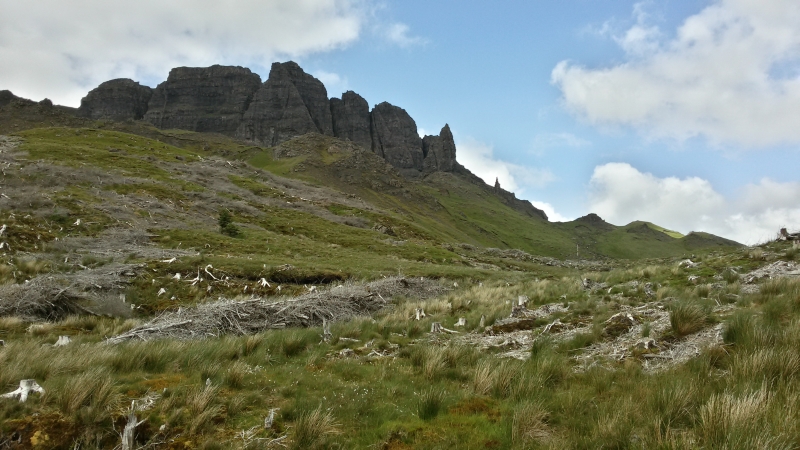 There are further spires besides the Old Man who occasionally are described as his family. His ex, the spire which in former times was called his wife, has however collapsed years ago. The legend says that an old man and his wife were looking hereabouts for a cow gone astray. They met giants and ran away from them. During their escape they once looked back and turned into stone. 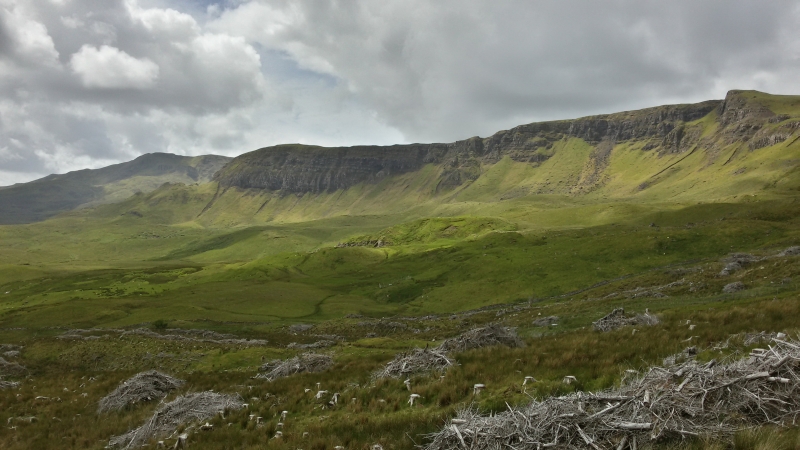 The sunlight playing on the rocks is all the time varied and fascinating. 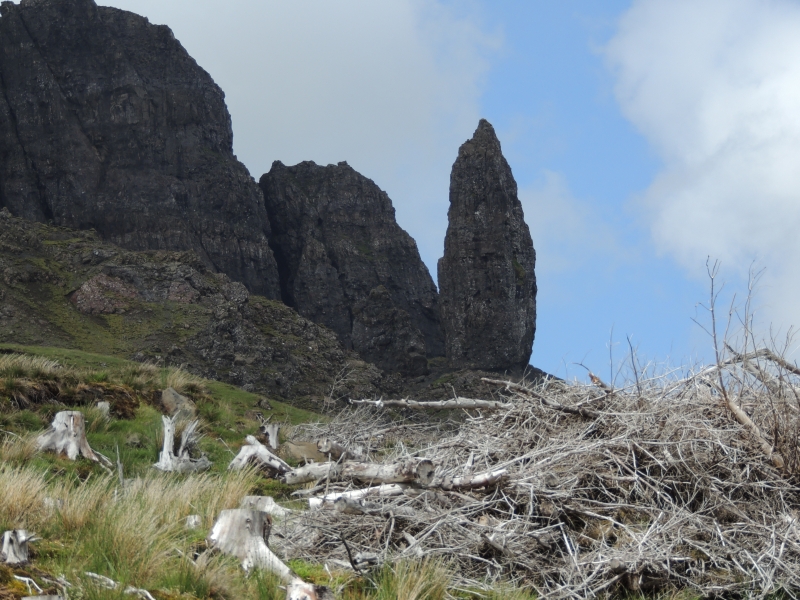 Almost there, the 719 metres high Storr is in front of us. Due to the fragile basalt it cannot be recommended to mount the Storr but anyway we lack the breath after the ascent. 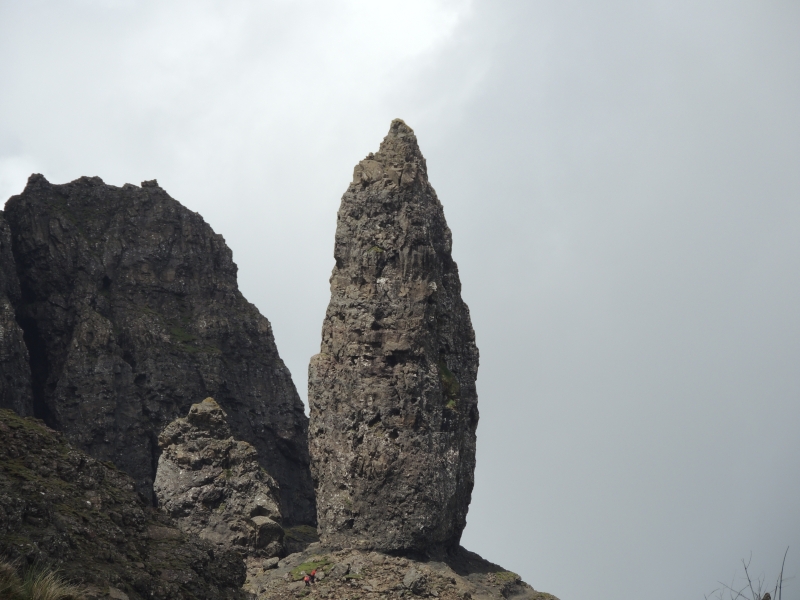 The "face" can be made out clearly. However, relating on light and shadow it can look quite differently. 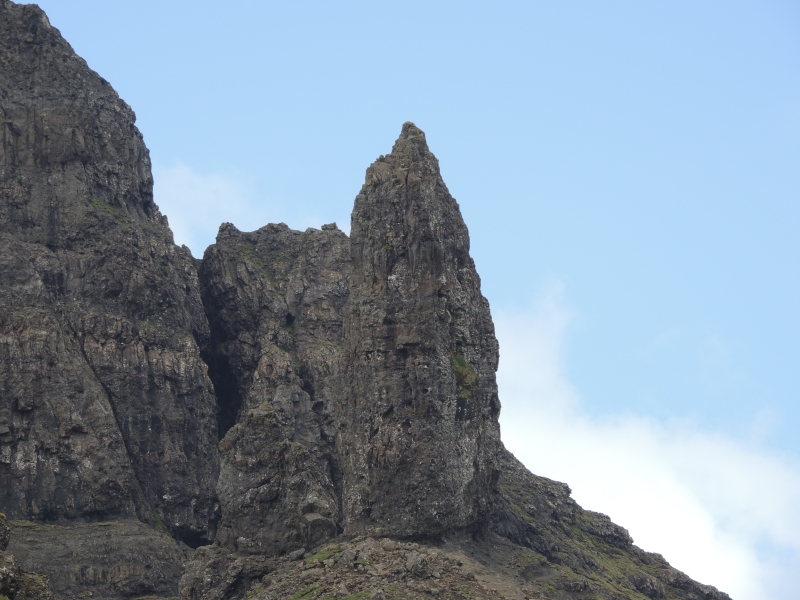 Doesn't the Storr look like the menhir of Obelix? 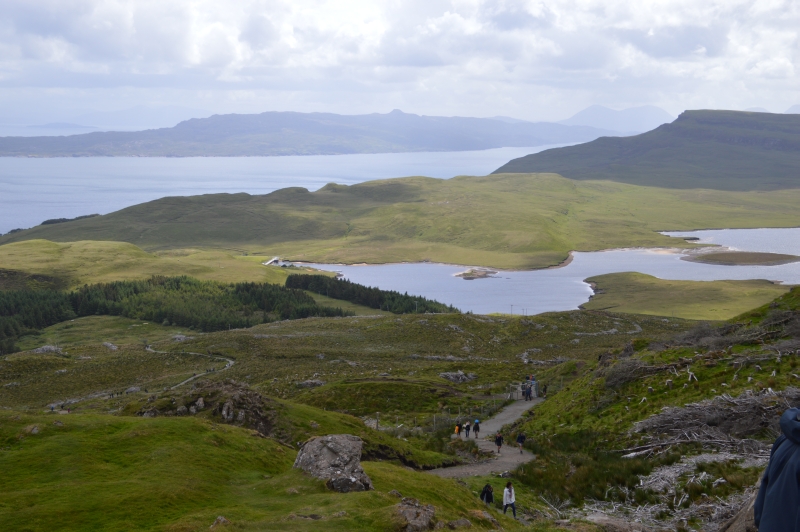 Back we go, passing the panting und sweating newcomers. Quite warm today.