Through wilderness up to the north 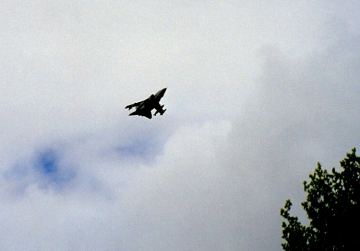 We are leaving Kinloch Rannoch behind and turn to the left at Balmore on to the B847.

It has nothing to do with the Castle Balmoral, where in august the English queen stays. Wonderful way rules a ban on air traffic of warplanes in the total area the Tay Forest, which densely fligh over the area.


Often the noise is really painful, it is a genuine disgrace, that the Scots have no pilitical possibilities to get rid of this english attitude.

Via Trinafour we pass the Glen Errochty. Behind Arch Bridge we reach the A9 at Calvine in northern direction.

On the left and on the right high rocks are our companions, to our left the majestic outlook on the Glen Gary. The Railroad accompanies us for a few miles, the shadows of the clouds slip over the mountains. 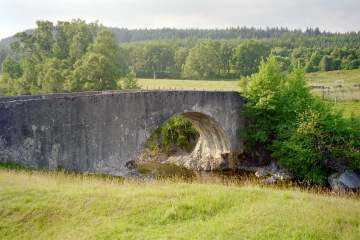 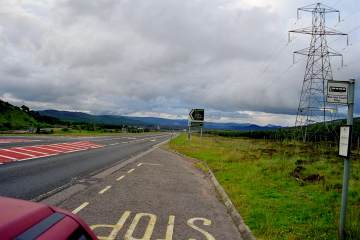 There is a sign 'Welcome to the Highlands' as we enter the Forest of Atholl drive.

In between the A9 becomes two-lane and that is each time our chance, to overtake slow cars and truck.

It is quite hot on this day and we smile regarding the snowsticks at both sides of the street, which mark the streets in winter.

On the rest area Ralia we stop and it is selfunderstood in Scotland, to find very clean sanitary plants.

On the continuation direction Aviemore the traffic becomes always denser. As we reach Aviemore, emerges a gigantic Felswand to our left.

These walls are illuminated at night with floodlights visible for many miles. 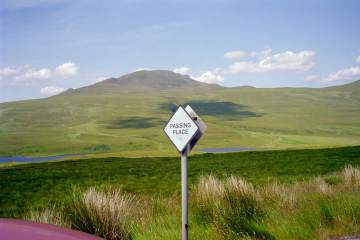 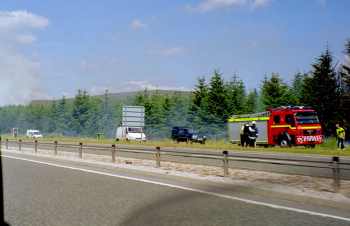 The River Spey, which was since many kilometers our companion, leaves us now and as we cross the River Dulnain, the landscape changes.

We are passing beautiful jaws and heather.

Then excitement, as we cross the River Findhorn and pass at the Loch Moy: in the pine forest of the Drummossie Muir rages a forest fire. The fire department of Inverness interferes, smoke is everywhere.

Finally the fire department appears to get the fire under control, we can move on and reach Inverness.
As we drive over the bridge of the Longman Point after Craigton, we have a fantastic view. On the left the Beauly Firth and on the right the Moray Firth is.
A few minutes later we reach Black Isle. A long bridge leads us over the Cromarty Firth and we see several drilling. 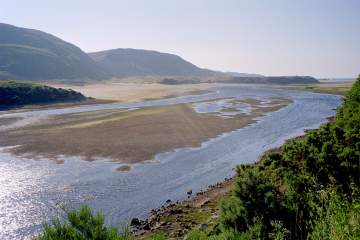 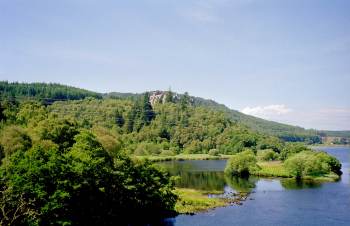 The terrain has become meanwhile quite flat, we refuel once more to reasonable prices at Kildary, until we reached Tain and turn on the A836.

Shortly after Bonar Bridge we stop for a look at a high bridge on the Carbisdale Castle, also Castle Spite called. It was build by Comtess of Sutherland, Mary Caroline Mitchell from 1906-1917, a sign tells. I wonder if she really did it by her own....

Since we are in a hurry, we leave out the famous 'Falls of Shin'.

A short stop in Lairg follows and again we find out that in Scottish pub one rarely gets something for lunch.

Again and again I must think of the words 'Altnaharra is not the Sahara' as the A836 turns into a narrow single track. 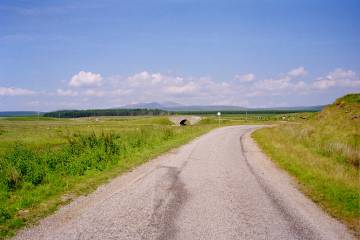 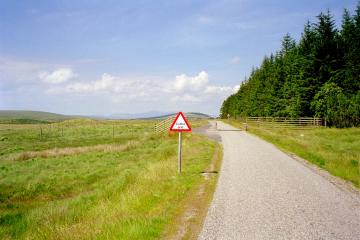 Flat area, frames by mountain ranges, very beautiful solitude, to the left side accompanies us a small river: Tirry.

A primeval landscape, now and then Cattle Grids. We get to Crask Inn, much to our surprise a sign in German language points out 'beware of lambs'.

Then we reach Altnaharra, we pass on further to the north to the Loch Loyally.

Many gadflies live here, every now and then are to be seen the remainders of abandoned houses.

They serve now as accommodation for the sheep in cold nights. We see fleecy gras, fern, heathen and birchs during we pass at the small hole Croggie always more more highly come. 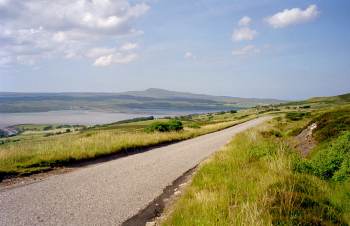 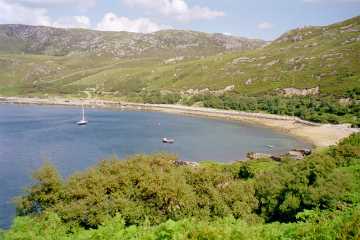 Then the end of this very beautiful, lonely ride through the wilderness has come, we reach Tongue and are rewarded by a fantastic view at the bay of Tongue.

We make a side-trip after Durness over the A838 around the Caves of Smoo Cave for a visit. Aside a small youth hostel it goes one over a dam in the Kyle of Tongue and gets exciting.

The landscape changes, rocks around - a 15 %-slope aside a mountain - descent through a fantastic landscape.

Further we go to Loch Eribol, which indeed is no Loch but a bay. We have to drive to the other side. Beside decayed houses many trailers of dropouts stand here. 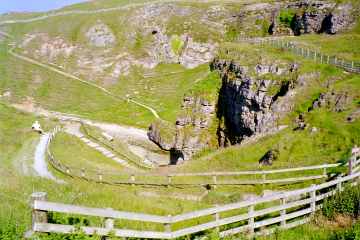 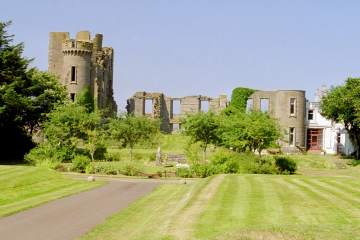 The mountains releases the view at a large bay with white beach, we have the feeling, to be somewhere at the Mediterranean, however lots of gadflies do not fit in this beautiful picture.

The way goes steeply to above and meanders further direction Durness, we are always watching out for sheep on this narrow street.

After this exciting excursion the cool cave of Smoo Cave a cure for us. It is impressively beautiful here and we listen to the sound of the dropping water, which falls down partially from a distance of 25 meters.

We take the same way back and again and again we have to jump into a passing place. Happily we reach Tongue and move on on the A836 closely the the North Sea. 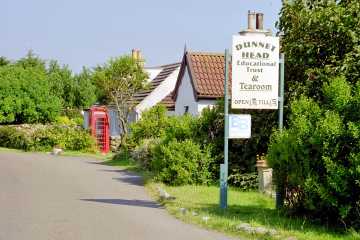 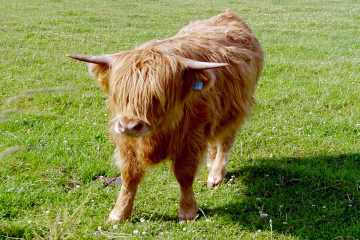 On Single Tracks we go, at Coldbacki we have an incomparable view at the sea. We are again now on single tracks when a cow before a Cattle Grid blocks the way.

In the evening sun we enjoy the prospect of the bay of Bettyhill, then we drive a piece along the coast.

Via Armadale, Strathy, Melvich we reach Thurso. On straight distance it goes on after Castletown, passing old ruins and we decide, to have a break on our way back.

The bay of Dunnet is ahead us - a fantastic view. Finally we reach Dunnet Head, the most northerly part of Britain. 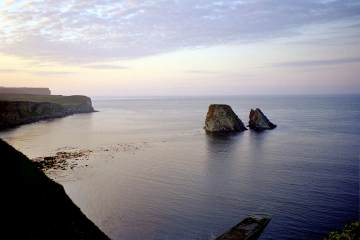 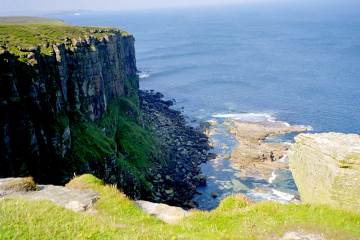 Some Minutes later we find our Bed and Breakfast quarter beside the only telephone in Brough.

We stop here greeted by the first Highland-caddle on this route. Kindly we are greeted in the house Windhaven and after we have unloaded our luggage, we visit the 'Northern of sand Sands'.

After a moderate dinner amounting to 33 Pds we go back to our Bed & Breakfast accommodation.

We find everything we need, even an internetconnection. We examine our e-mails and enjoy behind the house the view of 30 meters high reefs. 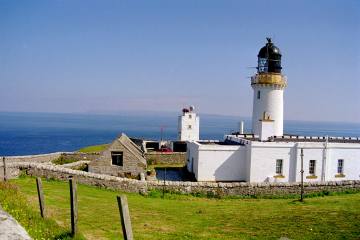 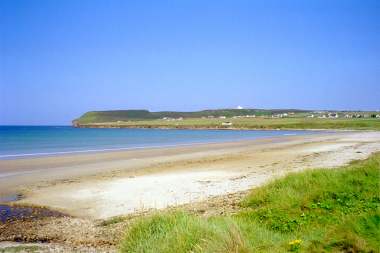 The next morning we have to leave after an excellent, extensive typical British breakfast.

Off we go further on the B855 in northern direction. We pass names like 'Many Lochs' and 'Long Loch'.

Finally we reach our goal: Dunnet Head, the most northerly point of Scotland with its typical lighthouse.

We have a look to the Orkneys and it goes back to Dunnet Bay.

The most beautiful beach of Scotland is here, which indeed is even better than the somewhat smaller at Bettyhill. However, the beaches of Morar, Arisaig, Uist and Harris are great, too. White sand and clear water, personally Romo and Amrum can not keep close to that. 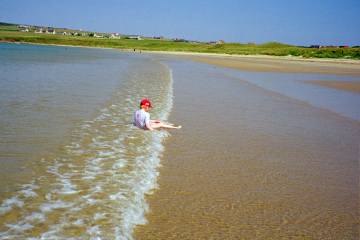 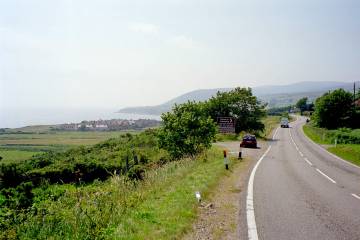 We have of course no swimming-clothes, but that does not matter.

Personally me as somebody who does not like to swim too often, I go in underpants into the water and swims a short distance in the icy North Sea, ultimately the salt helps well against midges-bites.

Under protest of the children we leave this paradise and back it goes over the A836 after Thurso.

This time we are paying the promised visit to the old ruin at Castletown.

Along the A882 and the A895 it goes through heather, in the peat is stung, further on the east coast on the A9. From Dunbeath - here Neill M. Gunn lived - it is getting exciting. 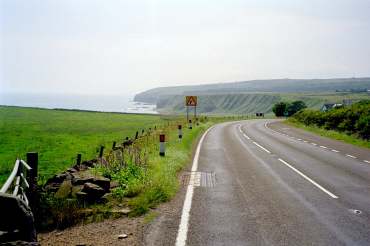 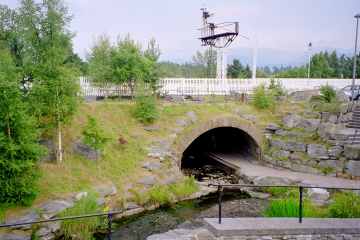 The sea is on the left as a companion and the sign 'Try Your Brakes!' at Berriedale do say anything. An insane mountain - and descent begins. We can smell the rubber of our brakes during we drive down in serpents and in the next moment steeply uphill direction sea of Helmsdale. pass Bora with its Destillery and Dunrobin Castle. We cross the long bridge at Durnoch and Tain finally reaching a large bridge over the Morray Firth at Inverness. In Aviemore we get Fish and Chips before we leave the A9 at Glen Gary to Trinafour. It is a quite narrow way, which meanders up and down through a fantastic landscape.

Again and again sheeps are runnung at the street and we drive only slowly, until we see the Ben Á Chuallaich like a giant before us. The sun is already on her way towards the horizon, as we drive through swarms of midges in our quarter.