A Trip around Loch Rannoch 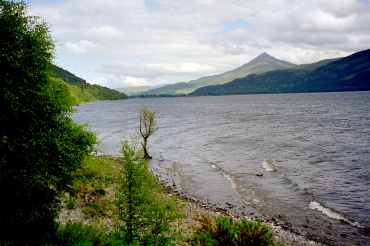 The other day a fantastic trip around the Loch Rannoch follows. We take off at the timeless little town named Kinloch Rannoch in direction south.

At the small monument, which reminds of the first World War, a small beach is. From here it is a good view along the entire Loch.

Along the south side of the Loch and there, where the Blackwood of Rannoch starts, we stop for a moment, having a look at the hidden place we had stood on our journeys no. 3,4 and 5.


It is not easy until we find again our old depot. It is more muddy here as on the very first journeys, which date lay back still already decades. We never have met so many Midges, too. 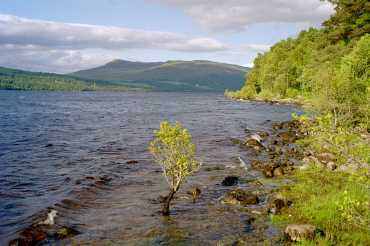 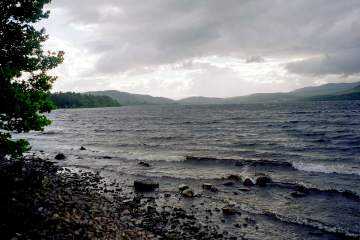 This time is it extremely bad, although the weather conditions has been dry and hot in the past months, thus no good basis for Midges.

Could it because in the north of Scotland many trees and plains were cleared and so the midges are trying to get back their forests? How knows...

The street passes Carrie. A small torrent under the bridge invites for a little break. Then we reach the place, my friend Michi and I stood in the year 1972 the very first time during journey no 1.

The old pine of 1972 next to the Loch Rannoch stands still at its place. After so many years...

Their knobby roots encompass now a plain of 12 squaremeters. The stem is so thick meanwhile, that I can embrase it with both arms only by half. 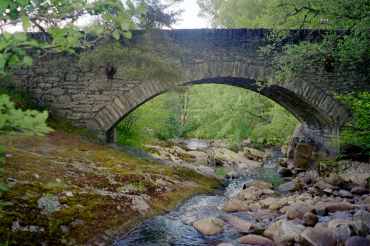 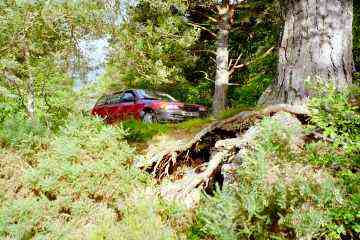 The entire south side of the Loch has decayed in the last years also here so very, that on this side camping ist not to be recommended.

We are passing Rannoch School - already closed since a few years - further to the small peninsula Eilean Mor. Via Croiscrag we reach Finnart Lodge. From here one has on one great view at the island Eilean nam Faoileag - which means isle of seagul- a tower in the middle of the water.

We had visited this island already once with a boat and found instead of treasures and mysteries only an old, small masonry and abundantly insects.

What for this island has been built? We learn by a resident, that here MacGregor, better known as 'Rob Roy' was held caught here. We pass by an old church behind Little Finnart. 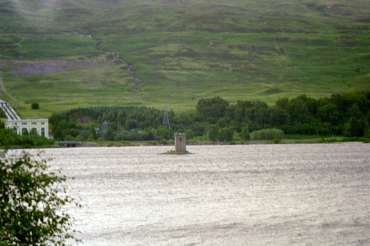 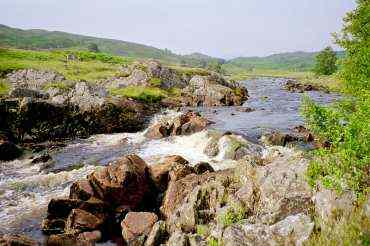 We notice a small, miserable school near the Rannoch Barracks, before we reach Bridge of Giaur on move to the left on the B846.

Now the very beautiful distance along the Gaur heading Rannoch Station is waiting for us. The tide of the River Gaur invites to put in the feet for the cooling down.

The next hold is the Powerstation of Gaur.

Here a footpath flared up to the dam. Above arrived, one is suddenly on the waterline of the small Loch Eigheach.


To the left the way it descendly leading down the dam. Further the journey jeads us to Loch Eigheach along to the small ruin Doire well h-Innes, whatever that may mean. 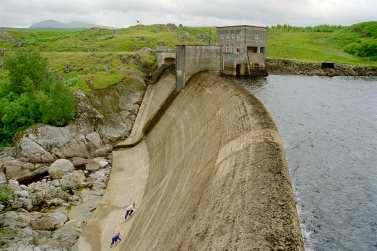 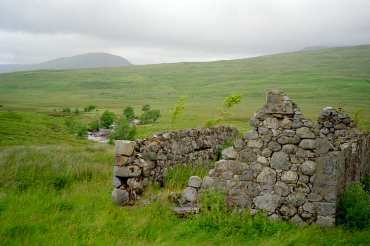 From here one sees already in the distance in direction of Fort William the railwaybridge. It does not take long, and we have reached the small station of Rannoch Station.
We have a break with tea, coffee, scones and shortbread in the tearoom of this romantic, small station, as the train from Mullaig comes. Then we go back at the Loch Eigheach and further to the River Gaur, passing Rannoch Lodge we are back again at the Loch Rannoch.

We continue this trip on the northern side of the lake and we happen Camusericht Lodge, where a small beach invites us.


On this side of the Loch now and then sandy beaches appears, which one can enjoy. Indeed are there, where also cows are nearby, some ticks and we had to altogether three time these stupid beastswith a tweezers off our legs. 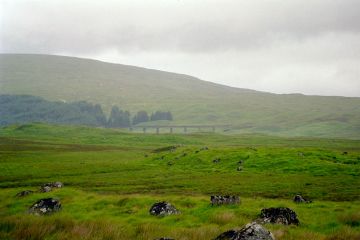 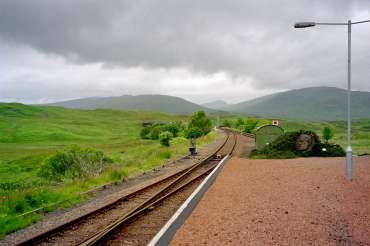 We cross the Bridge of Ericht and leave the Powerstation behind us.


At Killichonan we want to know: is McGregor really is buried here, as we have read in a fairy tale?

Indeed he has nothing to do with with 'Rob Roy', who was spelled MacGregor.


The old cemetery is completely locked and on a police-sign warns of entering. 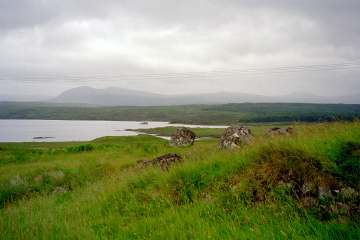 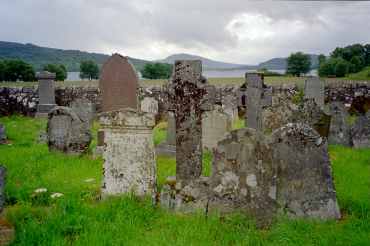 However, the walls are not especially high and after few minutes we find the grave of Robert McGregor who died in 1835.

It is one of the few gravestones, the inscription can be read clearly. It is quite awful here and we progress on our way back home.