Norway was really great, but we feel drawn back to wild Scotland.

There still is a to-do list such as  Cape Wrath, the most north-western point of the island. The name means "Point of Return". That's where we are going.

The crossing from Amsterdam to Newcastle was pleasant as always although the dinner buffet we liked to much no longer is what it once has been. In former times the choice was too great, today it is too small.

The first attraction of the journey is the recently opened Queens Ferry Bridge near Edinburgh. So lets cross it... 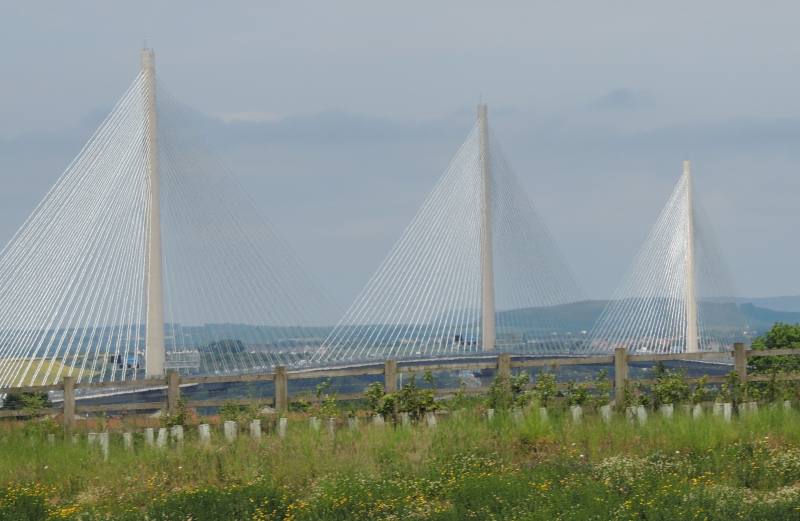 After an overnight stay in one of the most beautiful towns of Scotland, Pitlochry, the "Gate to the Highlands" we start early in the morning to the Shin Falls. We had a first rate night at Morag Cottage, comfortable beds and a great breakfast. 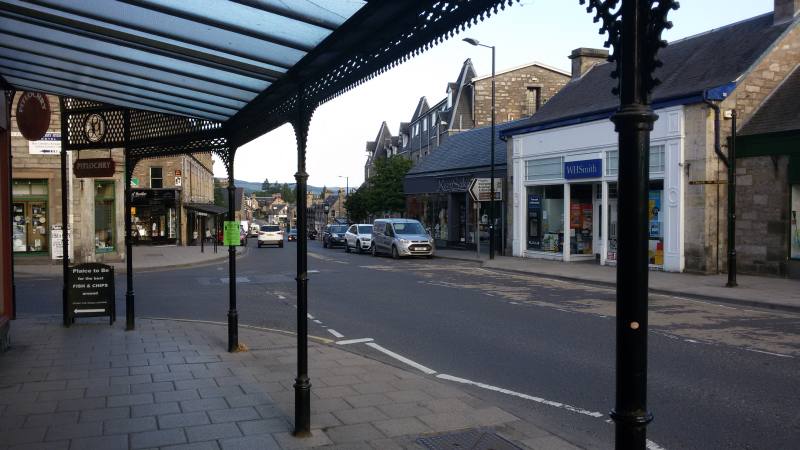 Now the most awesome part of Scotland is ahead of us. We pass the Cairngorms to Inverness. Behind the Dornoch Forth Bridge we have to turn left. Follows the traditional stop close to Bonar Bridge. Public toilets are rare on the route, therefore the stop. 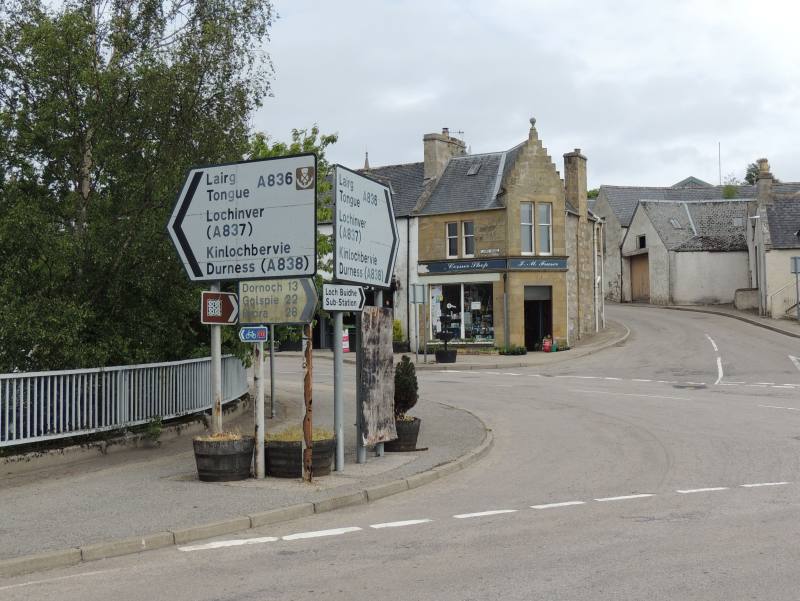 Once more to the left behind the bridge and a short time later comes the next traditional stop at Invershin. Always queasy to walk over the grating of the bridge to the opposite end and look down. You get a great view on Carbisdale Castle which is used as youth hostel since 2011. 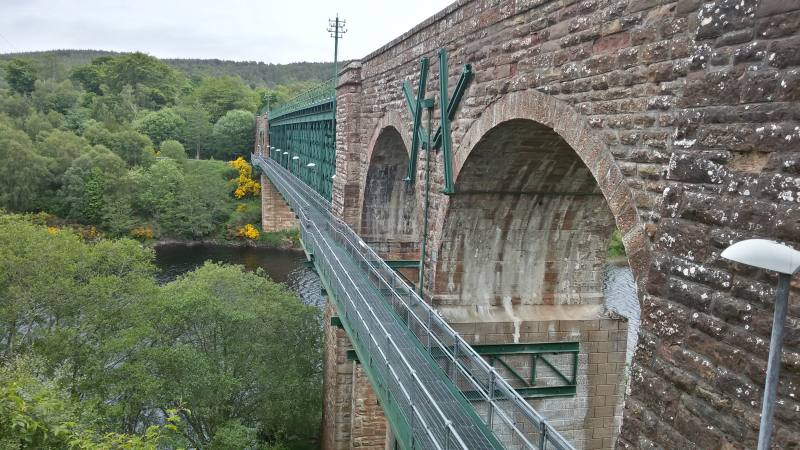 A short time later we reach the "Falls Of Shin Community Project".

Nothing much on here today, not even jumping trouts or the like. We are a bit excited because we do not want to be too late at our first cottage at Durness so that we can store supplies from the local supermarket. 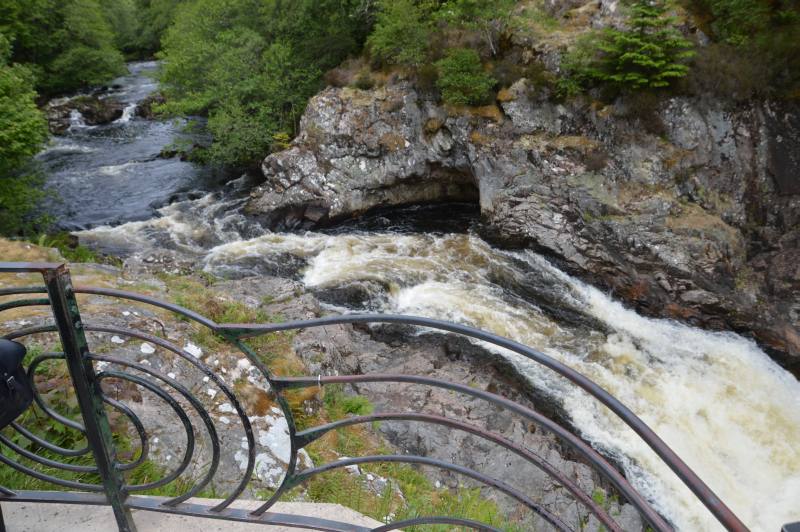 We are reaching Lairg and for the very first time do not take my favourite route via Crask Inn and Altnaharrah to the Kyle of Tongue but once more turn left. The direction is Rhiconich. So we avoid driving around endless Loch Eribol. 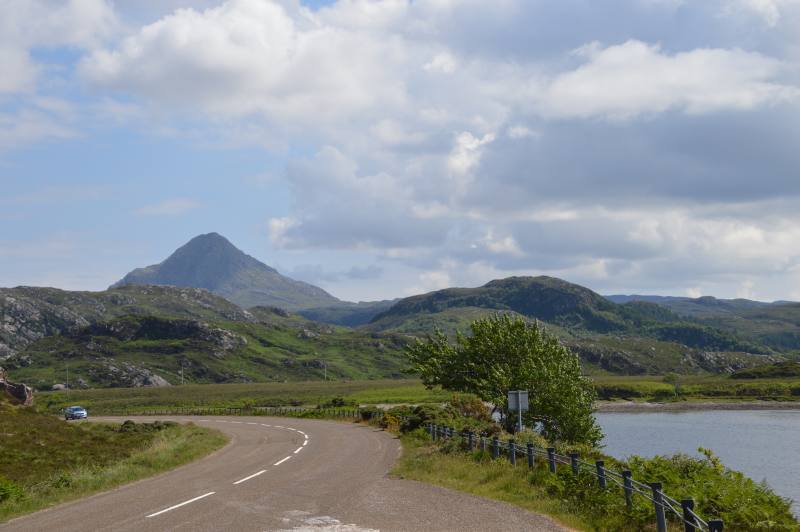 Bright sunshine and we get to Cottage Transvaal in Durness. 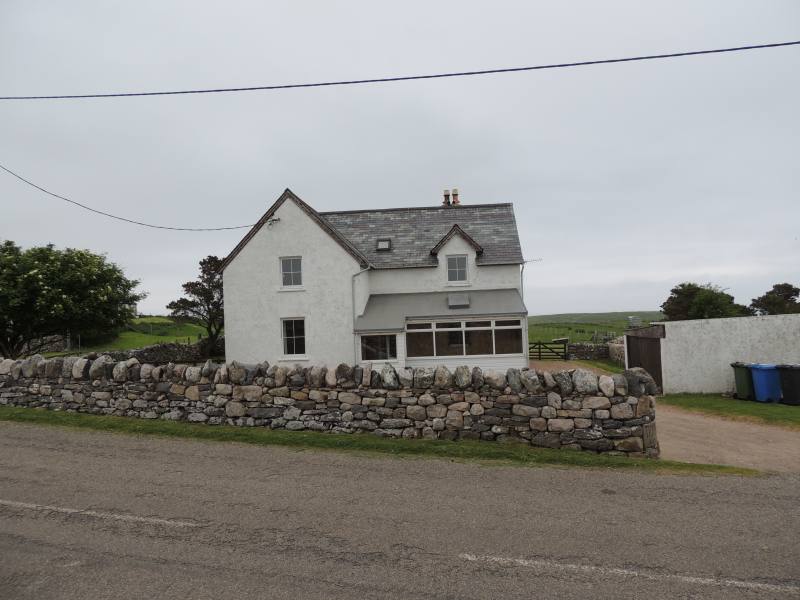 For the 2nd part of the week the weather forecast gives no charming news, so two days later we set out to Keoldale. After 20 minutes we reach the small jetty. We are not the only ones wishing to cross but there is room enough on the ferry. 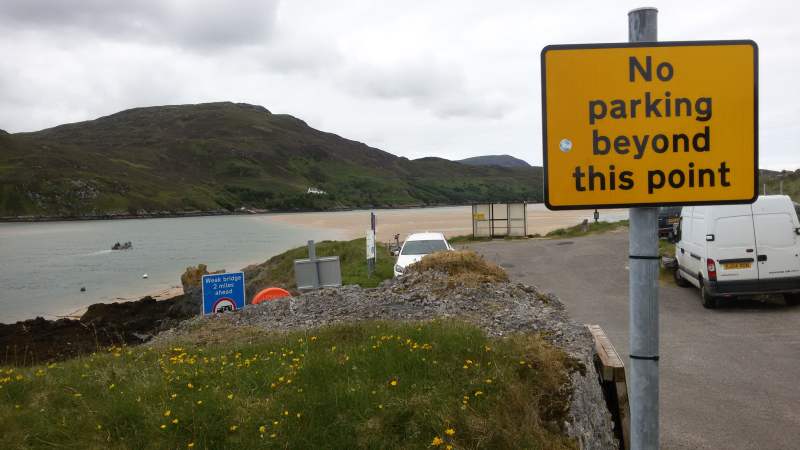 The transfer takes about 10 minutes, at the opposite side of the Kyle of Durness a small old coach is waiting for us. Not just our idea of up-to-date but somehow all people get into it and the coach starts jerkily. 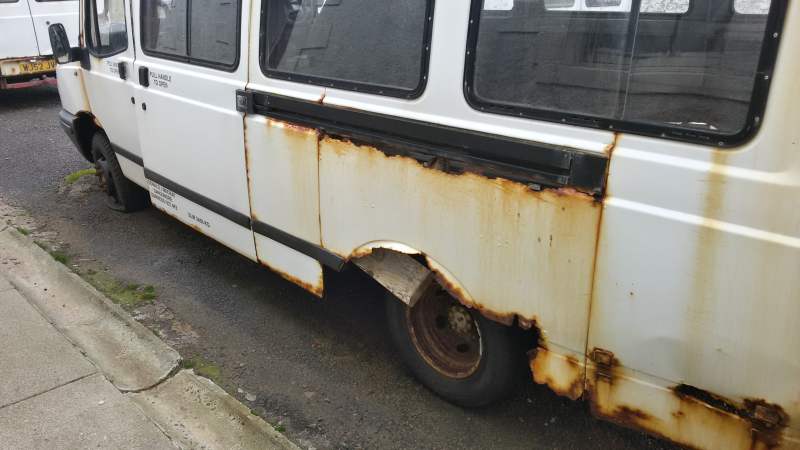 We are going over rough and smooth at slow speed. The driver explains to us that that he and his company team are responsible for the condition of the streets. We can easily believe it. 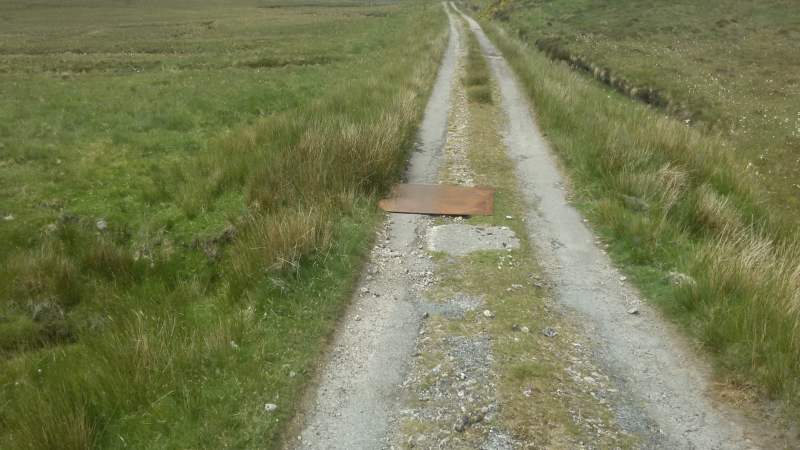 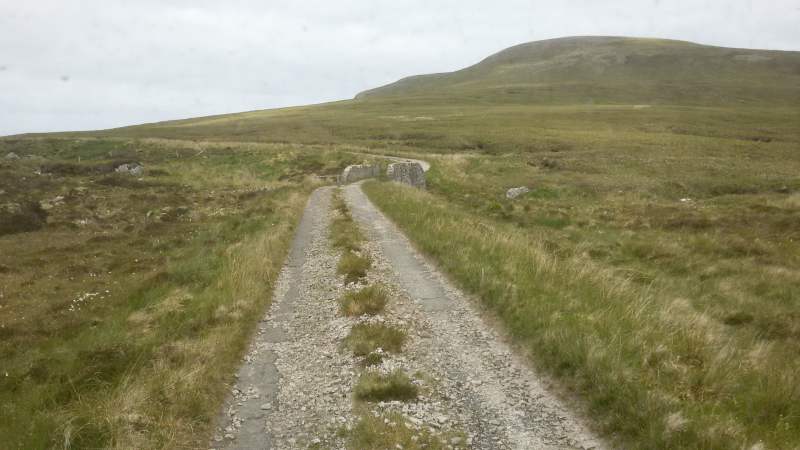 We are now in a military area. This is the reason why there are no "public" roads and visiting the lighthouse of Cape Wrath is only possible this way.  Well, there also is the "Cape Wrath Trail", a route of about 320 km across the Northwestern Highlands from Fort William to Cape Wrath but we wanted to take it easy today. The driver however does not make it that easy. 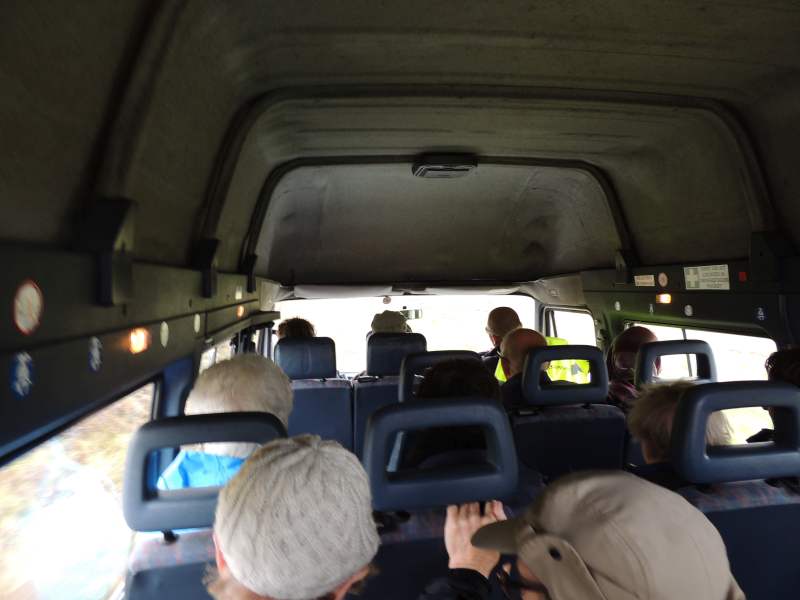 The coach rumbles across rock and gravel. Now and then remains of ammunition and craters can be seen as this area is used by the Royal Air Force as military training area for bombing. 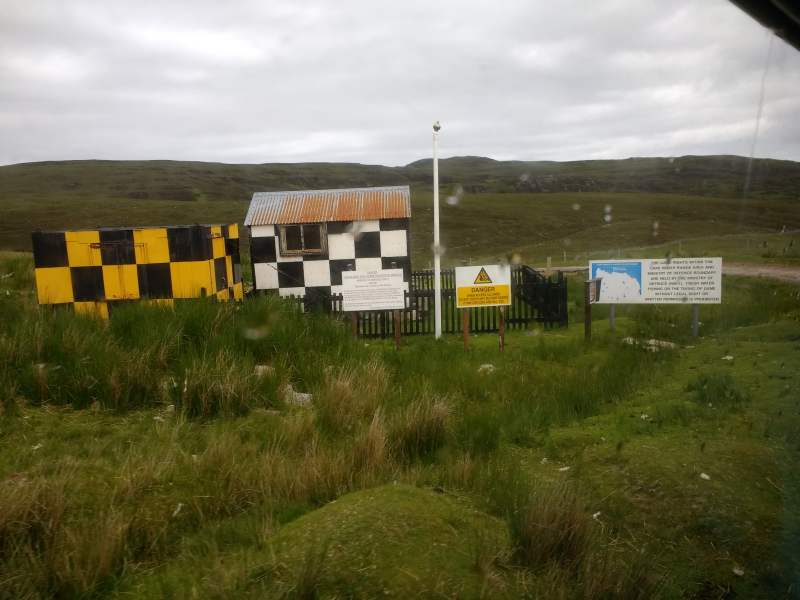 Our bums are aching when finally we pass an entrance. The coach stops and we are there. 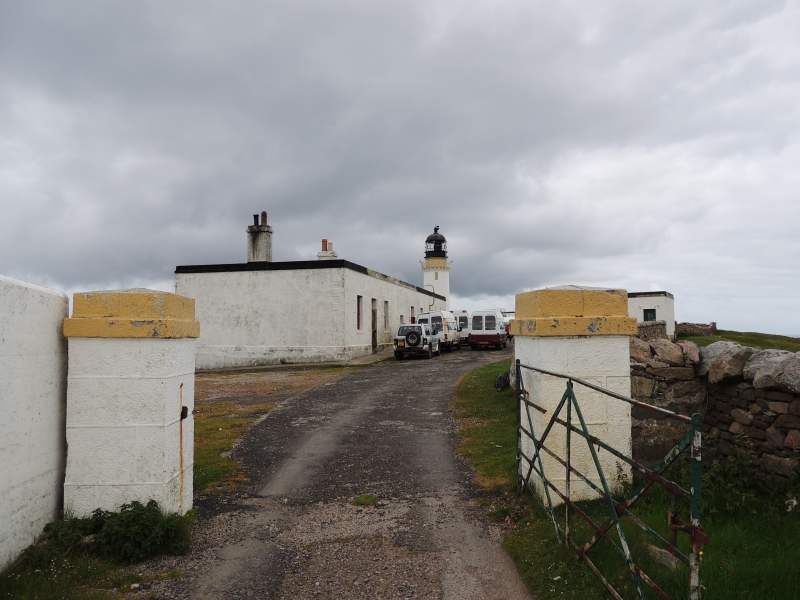 The lighthouse was built in 1828 by Robert Stevenson but first of all we peer down from the high cliffs whether any pirate ships are in view... 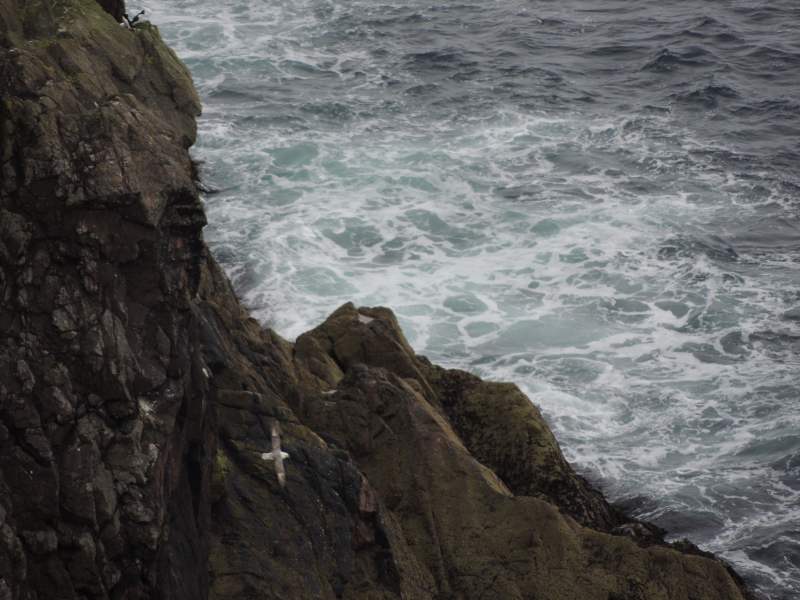 Anyway, this Robert Stevenson - an engineer - has nothing to do with Robert Louis Stevenson, the writer. 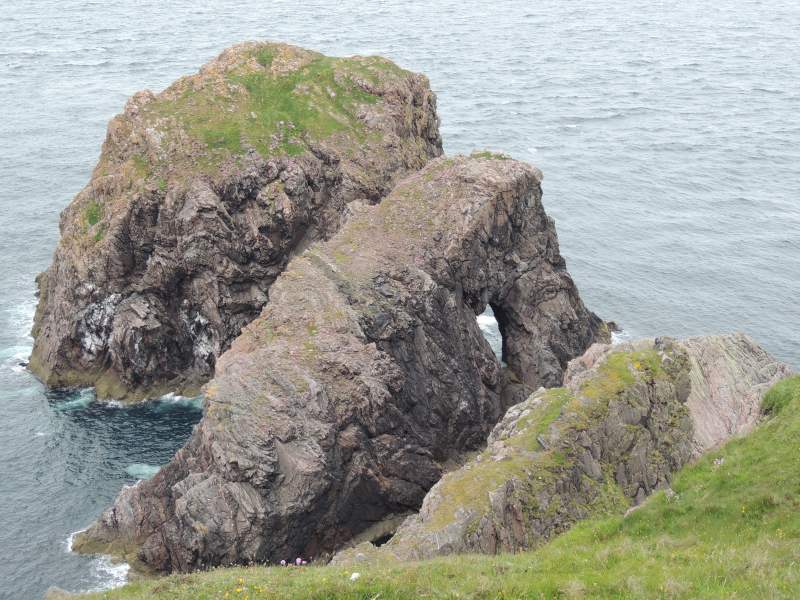 Neither are Vikings in sight. They are said to have returned from here to their homelands in former times - therefore the name of "Point of Return". 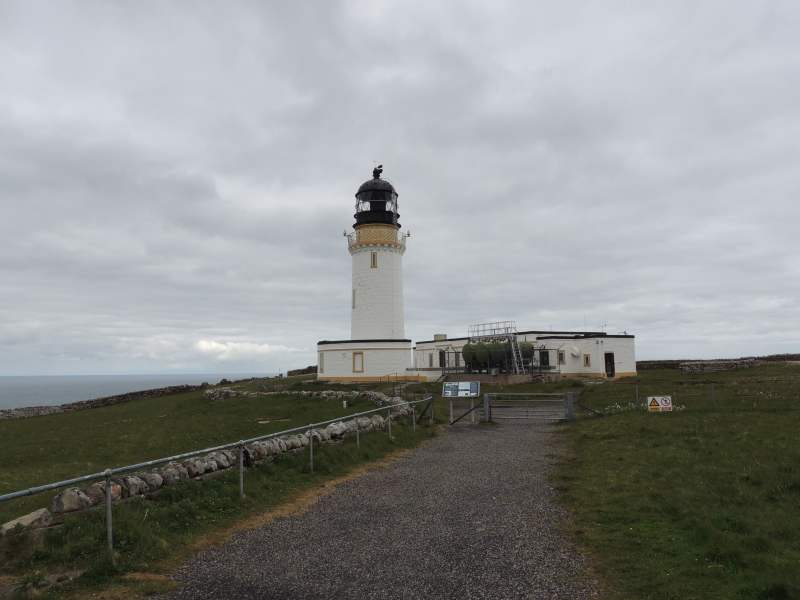 The lighthouse and its foghorn. 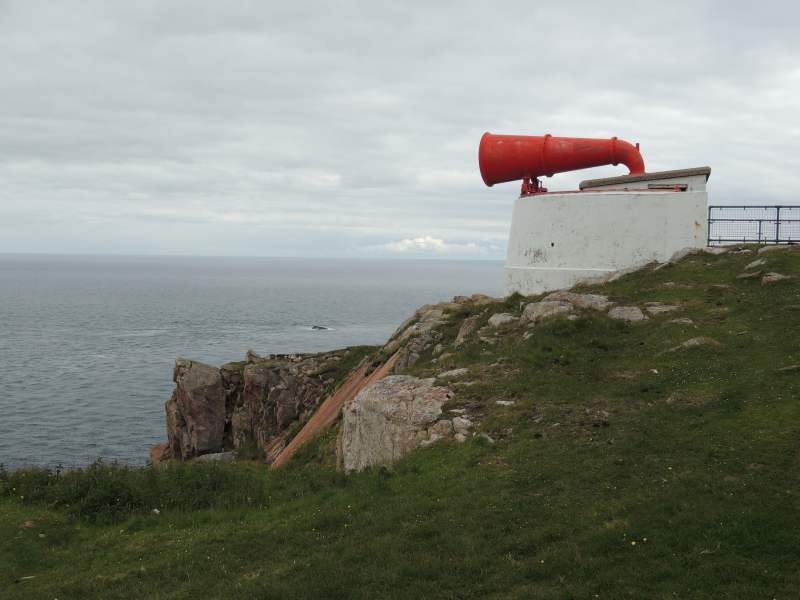 The view is gorgeous. There is a little coffeeshop and a 2-hour-stop. Then the driver of the Cape Wrath Mini Coach calls us for return. 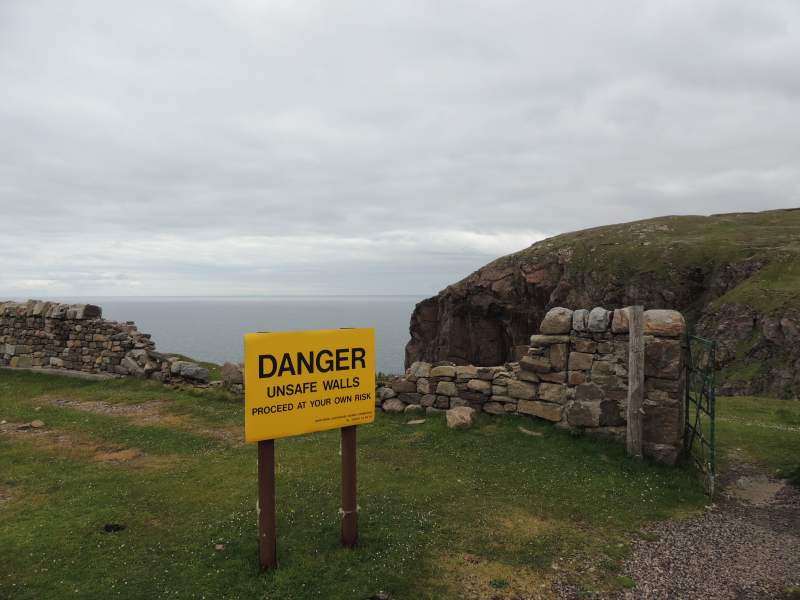 Weather worsens, a storm is announced for the coming days. We are rumbling back. 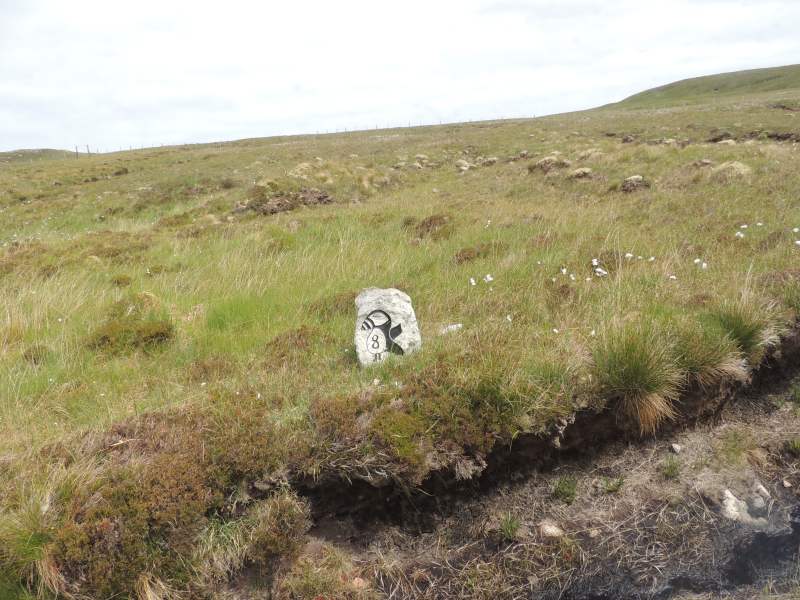 We are glad over a short stop to take a look at the beach of Kearvaig in the distance. 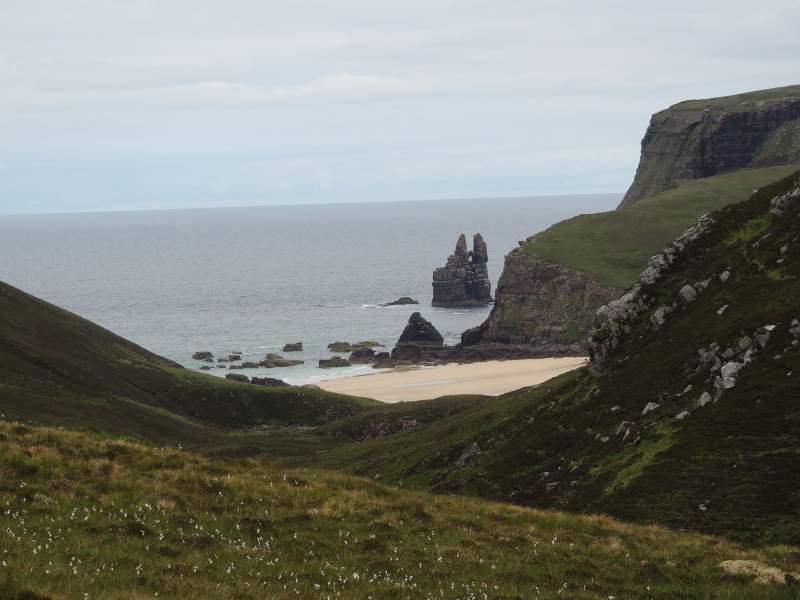 Beside this there is nothing but heather and lots of puddles. 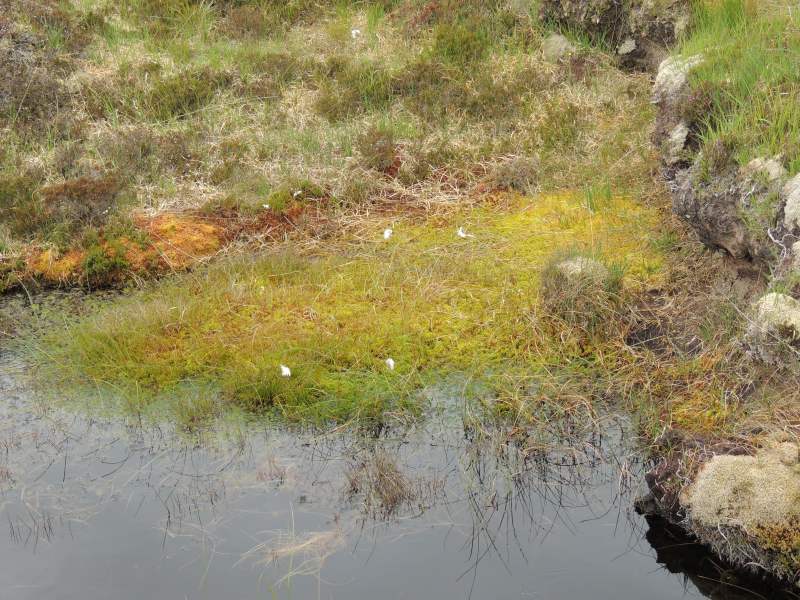 At the opposite side the Faraid Head and  the beach of Balnakeil can be seen. 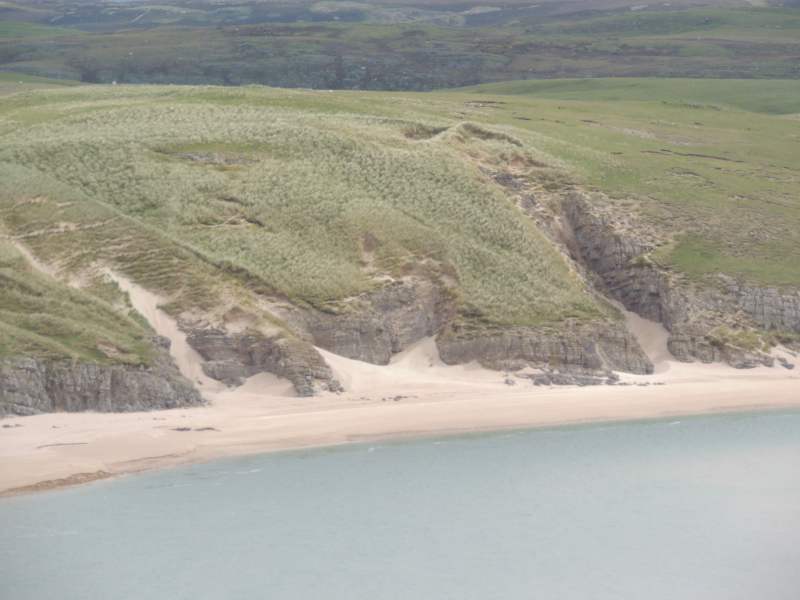 Seals at the Kyle of Durness... 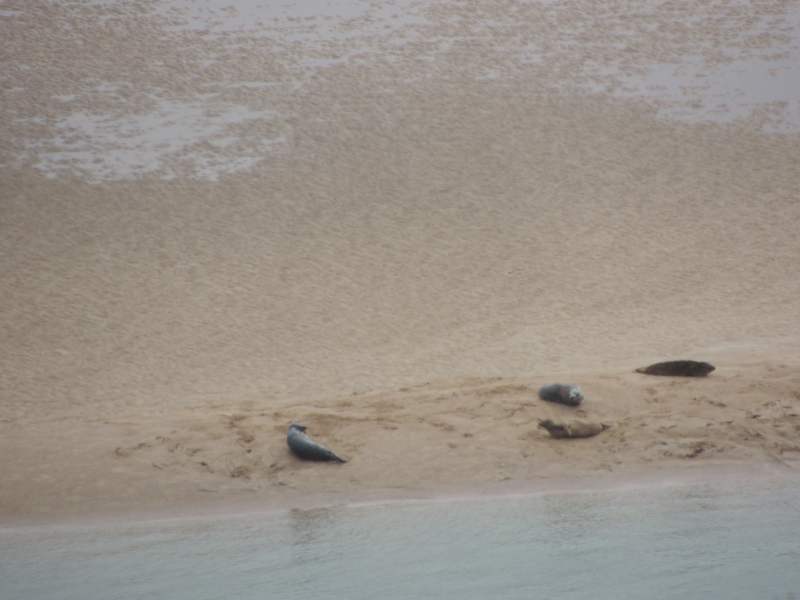 ...and arrving at the jetty. 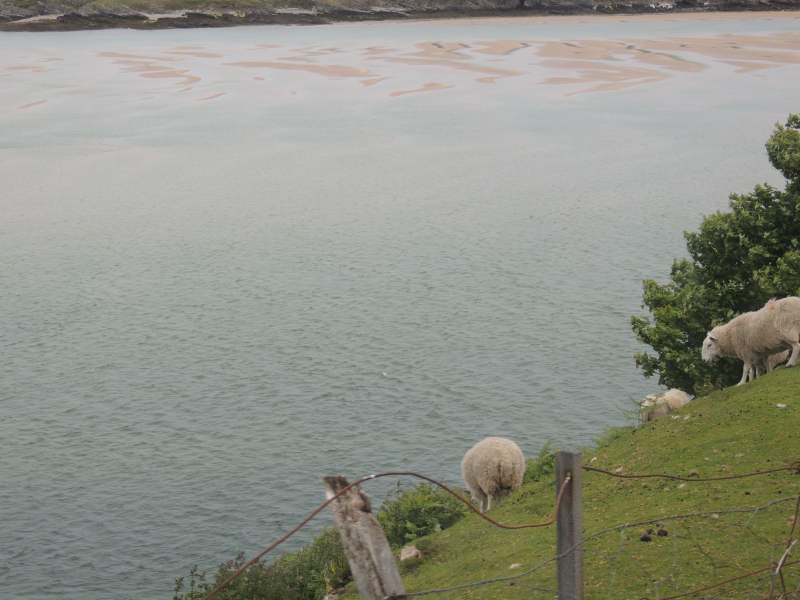 The transfer back with the ferry - rain approaching from Cape Wrath. 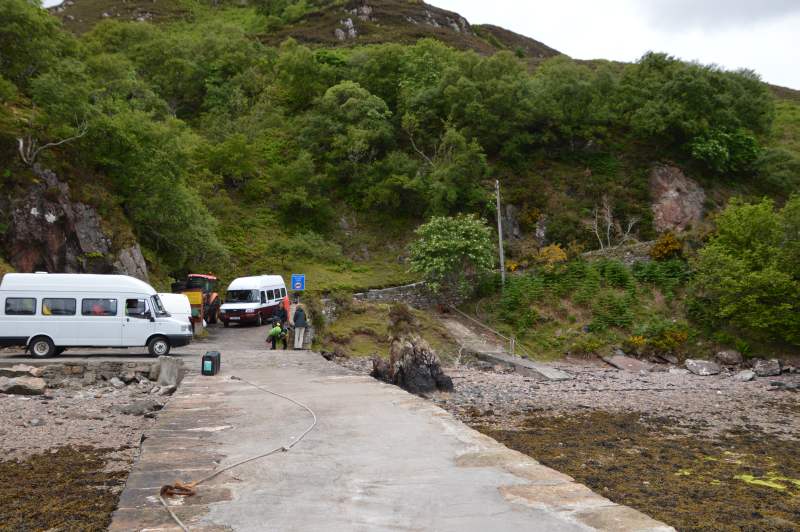 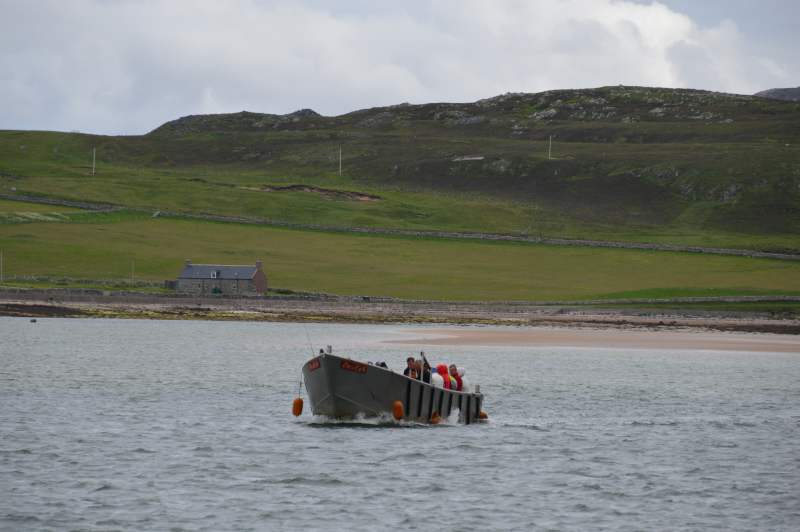 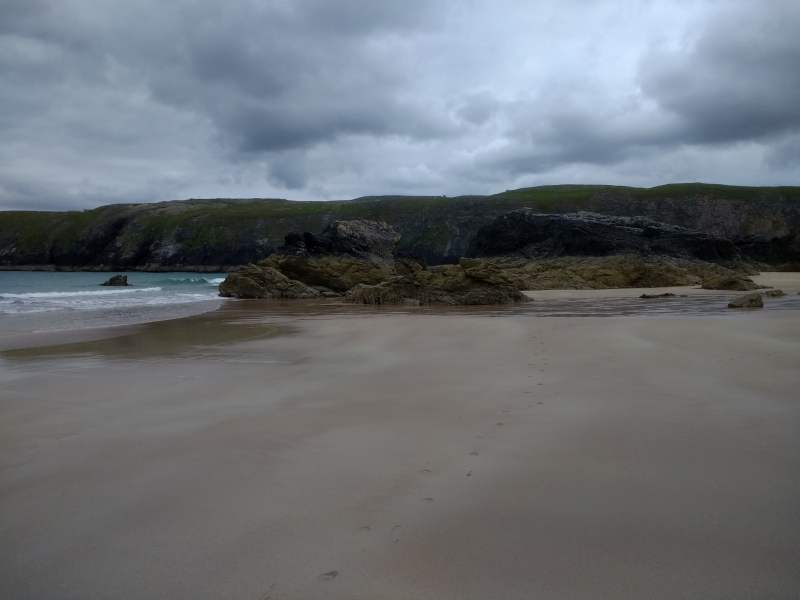