They had already walked for several hours on their eastbound road when they reached the village of Dalelia. Beside a few small houses the village had nothing to offer, so they walked on disappointedly. The sun stood towards noon and they all longed for a rest when suddenly the path ended.

Lord and butler helplessly stood at the banks of a lake und looked into the water. “This will be Loch Shiel, Sir.”

“McClown, you have been too long in the sun! I don’t see any locked wheel. See that you get us a boat.”

The butler only shrugged. Close by was a small landing stage. He stepped onto it cautiously and looked over the water. In the distance of a few hundred metres he could see the other bank. It looks quite within our grasp, he thought and looked for something they might use for crossing the water. There was nowhere any wood and McClown had to walk far to find two thin trees. Two hours later he was back and exhausted.

“Fine, McClown, now we’ve got the oars. So only a boat with a cabin are missing.”
“Well, Sir”, the butler bashfully replied, “that is all we will get. We could fasten the trees to the wheelchair as floaters. You and the hamsters jump in and I’ll push you.”
“Perfect, McClown”, milord exclaimed. “If I ever can lay my hand on some money, you’ll get the wages for the last ten years! Go on, what are you waiting for?”

It did not take long to fasten the tree trunks to the wheelchair and the curious vessel was ready. Their journey could start. The hamsters were sitting on their suitcase, prying, for they wanted to enjoy a journey with a catamaran on deck, of course. Flecki had ransacked the suitcases and found socks. She had cut off the tips and distributed them so that each hamster had a modish sun hat. Lord McShredder sat on his suitcases more or less comfortably and watched the opposite bank while his butler pushed the vessel into the cold water.

“Go on, McClown, you lucky sod”, His Lordship crowed. “If I were a little younger, I’d also like to take a swim.”

The answer to this was nothing but a growl for the lucky sod had some difficulties to keep his head over water while he was pushing the vehicle. Against expectations they reached the shore without problems - apart from the fact that McClown had to swallow a lot of water.

“I don’t know why you are complaining, McClown. This is clear, healthy water!” The butler did not answer but began to unfasten the two tree trunks from the wheels. The hamsters looked about them curiously and immediately noticed that it was very green. Certainly they would find something to eat here. In the meantime McShredder had walked ahead and was standing in front of several peculiar stones. They had the form of crosses. In the distance a small house with a small tower could be seen. 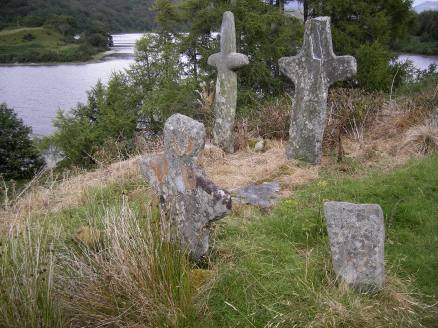 “Seems to be a chapel, Sir”, the butler remarked.
“Seems to be, McClown.”
“Perhaps this is a cemetery”, McClown added.
“Eh? A lemon tree? Balderdash. It’s a cemetery. Look at all the stone crosses.”

Silently they approached the chapel. They paused in front of a wooden sign with a faded inscription. The butler stepped to the sign and read aloud:

“Chapel of Eilean Fhianain. The oldest chapel with the oldest cemetery of Great Britain. Here Calum Cille was. Still today many people make a pilgrimage to his grave.”
“McClown, do you know what Eilean means?”
“Certainly, Sir, it’s the word for island.” “Well, McClown, and what catches your eye if you look about you?”
“Sir, I can see the old chapel, many rocks, old crosses and water all around us.”
“Water, McClown?”
“Yes, Sir, water. Er… wa… wa… Why water? Sir, we are on an island!“
“Very smart, McClown, and that’s the meaning of the word eilean.”

Helplessly, the butler sat down on a rock and buried his head in his hands. They had landed on an island! His next thoughts wandered to the hamsters and he walked over to the wheelchair. When he reached it he saw his little friends lying cosily at the stony bank in the sun. Far off the two trees were drifting in the water. McClown yelled furiously and stamped with his feet. How were they to leave the island? The hamsters were quite startled when he ranted and raged along the waterline and threw stones at the drifting timber. Finally he calmed down, collected all hamsters and put them back into the suitcase. Then he pushed the wheelchair over the uneven ground to the chapel where His Lordship was sitting on a bench and smoking his pipe.

“I’ll tell you something, my dear McClown. Here, close to the history of St. Calum Cille we will take a rest. The chapel roof will protect us from wind and possibly rain.”
“Sir, who or what is St. Calum Cille?”
“McClown, you don’t know Calum Cille?!”

Lord McShredder sucked at his pipe and pensively looked at a stone cross.

“Calum Cille was also called St. Columba or kind Calum Cille. He is the most famous Celtic saint. As an Irish missionary he reached the heathen Scotland via the Ardnamurchan peninsula. To this day, my dear McClown, he is worshipped in the Highlands. The Thursday of the second week in June is named after him and all Thursdays - traditionally known as Calum Cille’s day - are looked upon as lucky days. Look about you, McClown. An ancient Celtic bronze bell is hanging there. Do you see the gravestones over there? The big Celtic cross might have seen the saint.”

Awed, the butler looked at the ancient relicts. Then his glance fell on His Lordship again whose pipe had fallen to the ground. He had fallen asleep in the warmth of the sun. McClown looked at his little hamster-friends but they also were sleeping and snoring. So he decided to take a nap, too, and had fallen soundly asleep after a few moments.