In fact a travelogue might have stood here just as well about Amrum, but the choice for the most beautiful trips fell very just on the Limfjord.

Little Christina had become in the meantime old 1 year and our destination should be something special this year. Our choice fell onto a small cottage near the Limfjords. 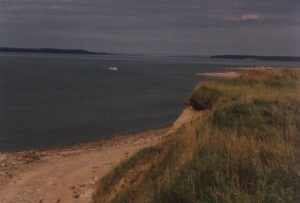 Auti, our loyal Scotland-Car, had gotten a successor, a red Opel Astra. The name remained the same one. Auti II should prove as a worthy successor. On the way we held only once shortly for cleaning Christinas nappies and after some hours we achieved the wonderful Limfjord. The Limfjord lies as a boundary between the middle and northern Juetland. Until for the great tidal wave in the 18th century was the Limfjord a genuine fjord. The largest island of the fjord is the island Mors, that is combined with one with a gigantic bridge with the mainland. Naturally, we visited Mors, too. First of all, however, we learned that larger vacation settlements were relatively unknown here. Everything was put on distributed quite on a large-scale and far. The individual holiday houses were separate as a rule through high hedges of each other. To find the fjord did not keep on being difficult, however to find the house rented by us was by far more difficult through that. Finally we found it and spent the next weeks in the most beautiful house in which we had 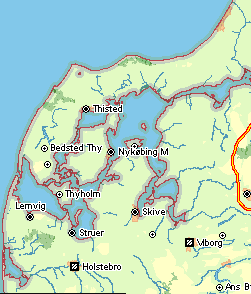 ever lived on our many trips. A large lawn was before the house and the distance to the next house was corresponding to that. Holiday-makers who only want to remain for themselves are correct exactly here. After having rearranged the furnishing according to our taste (of course everything is put before the departure again as before !), we stated that would expect the next weeks with Danish television broadcast stations. Cheer in the north native senders were not to be obtained, however an American thriller with Danish subtitles has also his charms. But who wants television on vacation better stays just as well at home and breed oranges. Furthermore one must be in the one clear that vacation with child means that now is done that the child determines. Thus the climax was every day the common visit of an on a large-scale put on playgroundCars with sprocket drive could be driven there, trampoline could jumped and to be tried out every swings and seesaws. The beach was actual at some places how it looks in the advertising: white, clean and human being empty. At other places on the other hand it looked as at the Scotch eastern coast: stony and slightly view. onto a good swimming-place, however, that is to be recommended anyhow only in the summer time. 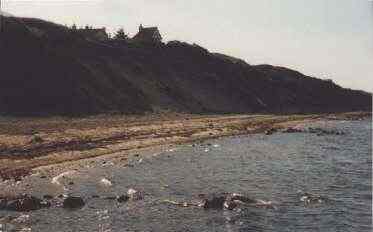 As long as the children do not go to the school yet, one can still take holday out of the real holiday-seasons, later one is exploited then and he must catch more deeply into the purse.

Absolute one should visit on the corner the castle at Spoettrup, it is nice. Furthermore the visit of an experience-farm should not be forgotten especially as the there available rape honey is simply delicious. Also the former Viking village Hjerl Hede is not far away. In arduous work everything was set up here faithfully again. If the weather cooperates, one should take already right a lot of time for the inspection.

To who that all is not adventurous enough, that one should undertake an extensive excursion along the beach. The Limfjord is a fjord as the name already says. Strictly speaking it is a gigantic, protected bay. A lot wind and waves are not to be expected here. On one of our excursion in northern direction we found a small fisherman cottage in which next to the compulsory ice also meals were offered. 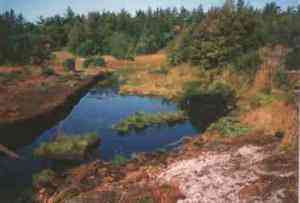 The cottage stood on a high cliff and the view compensated for the long way. One feels at this place remembered at the stories by Robert Lois Stevenson. It would not have surprised me if the "Hispaniola" had arrived suddenly into the bay and captain Long John Silver had joined us. Who loves the loneliness should visit the Limfjord best in the autumn months and take along a thick sweater. Anyway this season is suitable particularly for the observation of the night sky. If the darkness sets in already quite early, there is not any light of any industrial plants which disturb the control of the night sky here. In the evening I could screen up to 20 satellites here in 10 minutes. There we just of stars speak: it is still in the stars when we return again onto the Limfjord. It is not a real pleasure to do such a long journey accompanied by small kids. But, if the possibility offers itself sometime, we will go immediately again there. The journey is quite indeed wide, but perhaps one should take into account a pause with a break for the night once. ...