Bornholm, a jewel in the Baltic Sea, is 1600 square meters large and has a number of inhabitants of approx. 47.000. The Coast Length is about 139 kilometers. The cycle tracks and the tent places belong to the most comfortable in Europe. 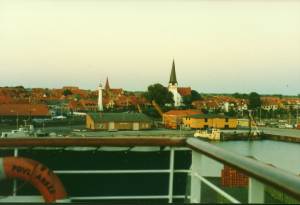 When at the far horizon a narrow country stripe came into sight, it got hectic on board again. Almost the journey was done and slowly the ship approached to the harbour of Roenne. This time we were visiting the island accompanied by our child and by car. We were tightened, because the previous trips by bike had let become us genuine fans of this island.

We left Roenne in southern direction and passed Arnager. Here it is interesting to go once along the coast. Martina found even an ammonite here in the calcareous rock. However, at least I found a dead cancer for that. The ride kept on going at the southern coast with its wonderful beach in direction Elmestrand. After short time we had arrived. 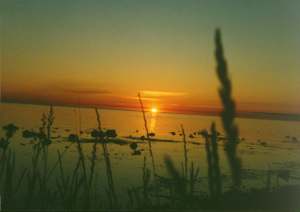 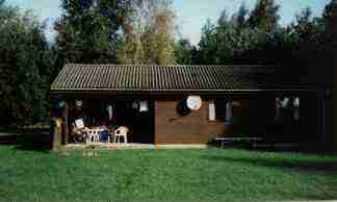 The house was sited wonderful, a large medow in front of the house invited in a big semicircle to playing and raging. In the evening it became exciting for little Christina and us: Roe deer with their kids moved about the green. From the window we made skin-near video photos, even a few pheasants were to be seen. The house belongs to friends of us and it is rented in the summer time.

Our first study trips led us after Paradisbakkerne and Ekkodalen into the inner island. Into Doendalen one can go for a walk for hours through secluded and adventurous, almost dark forests. The waterfall here has a height of 22 meters. 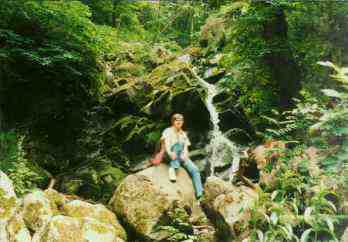 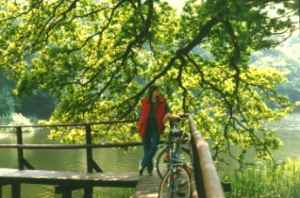 In between a long wood footpath leads about a lake up to a gigantic rocking stone. Only for the visit of the inland one should take a lot of time. A bike is not absolutely to be recommended, because often enough it was called for us: to get up and to carry the bikes. ...

If there ist a time for a break, the Rubinsee

have to be visited. 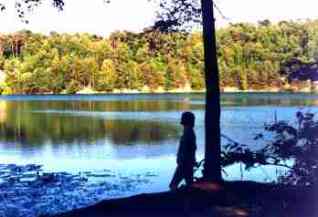 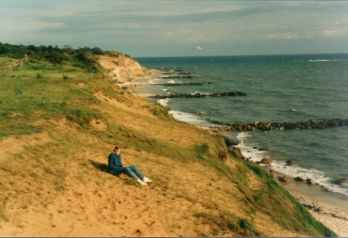 Who has pleasure can go onto a wonderful, long beach way. Starting in Arnager, this way leads along the southern side up to Dueodde. There it goes on in northern direction about Snogebaek, Balka, Nexoe, Arsdale and Svaneke. Further it leads to the northern side about Listed, Boelshavn, Melstedt, according to Gudhjem. Here a completely different landscape appears, there is not beach at all, only rocks and steep slopes. More further the trip goes about Sandkaes, Allinge, according to Sandvig.

In the proximity of Sandvig on should consider to visit the the castle Hammerhus. Here one can undertake also a boat trip into one of the grottoes. Now it is a good idea to run for something delicious in between. Visiting not the inedible Poelser, but once a Rogeri, however and testing freshly smoked fish. Who wants, can watch also during the smoke-curing of the fish. 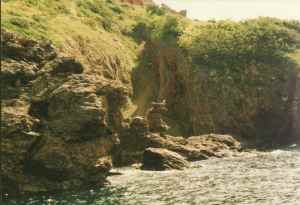 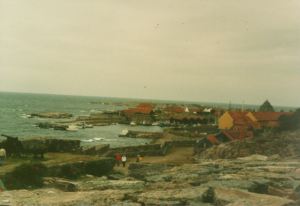 From Sandvig, exactly as in Gudhjem and Svaneke, a ferry boat works according to Christiansoe. On the ride there we saw many seals.

After coming about Vang according to Hasle, we supplied ourselves once again with smoked fish. We arrived now again on flatter ground. That is the special charm of this island, she has two faces. Strictly speaking, there are even three: the flat southern coast with their wonderful beaches, the brusque north coast and the fascinating inland. Not to be forgotten are the romantic harbours of this charm-full island. 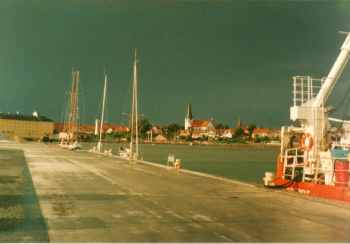 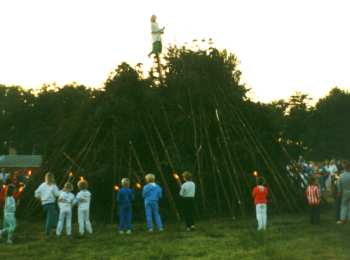 If one stays on the island in of the day of Midsummers Night, one can assist to the Midsummers Fire. At the late evening everywhere big wood piles are piled up. The witches of course are not real ...